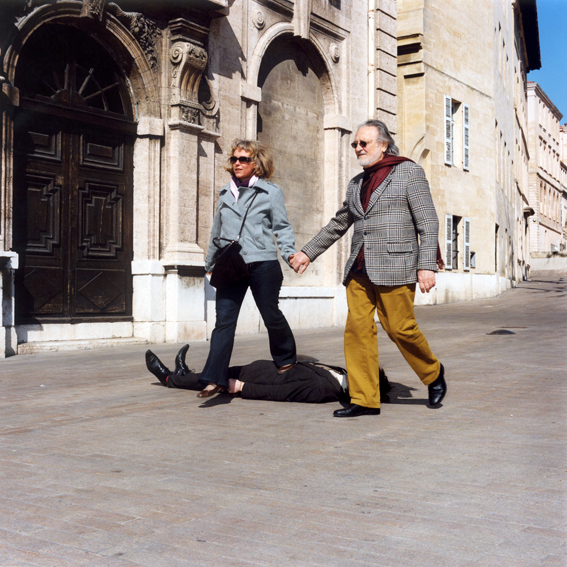 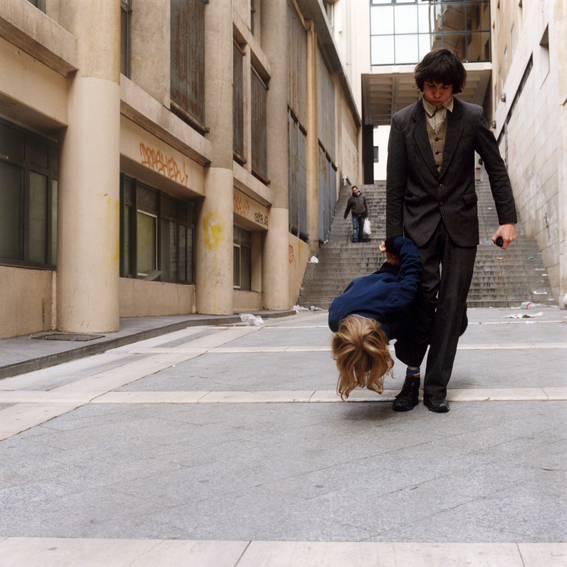 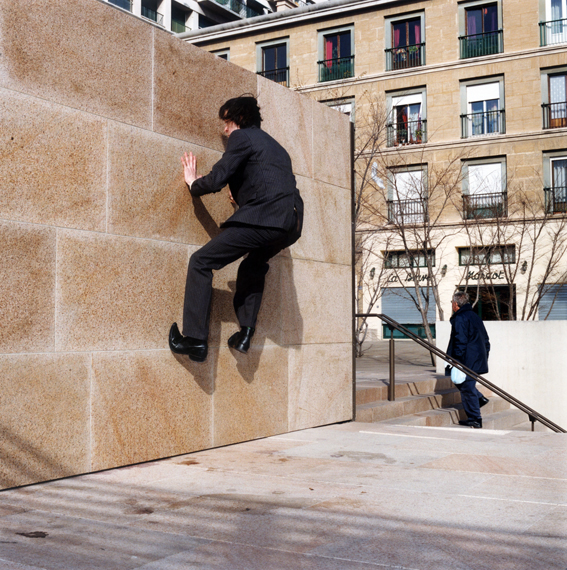 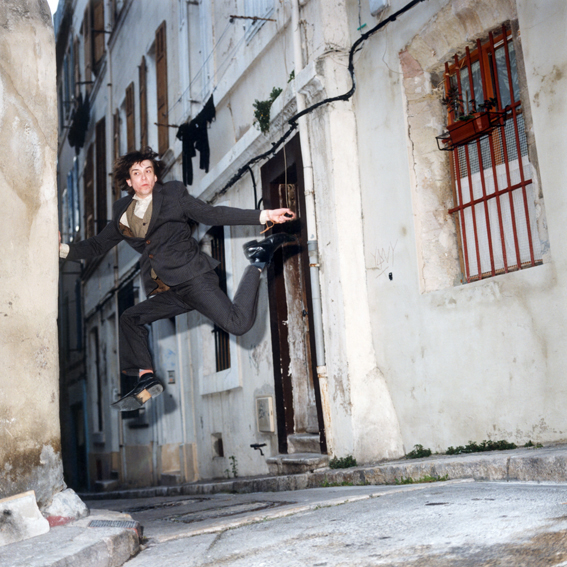 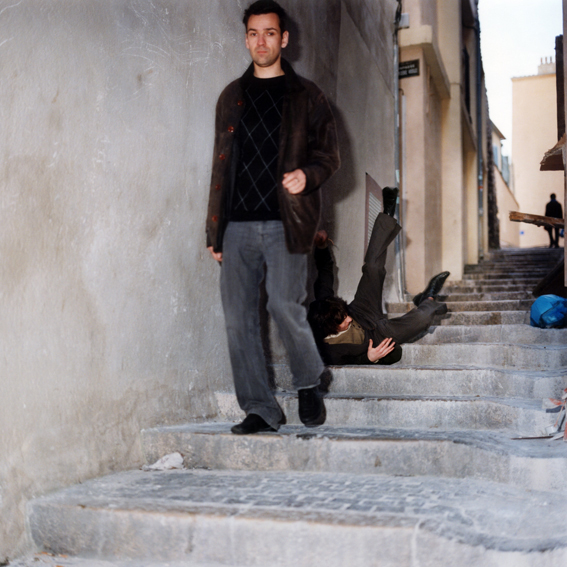 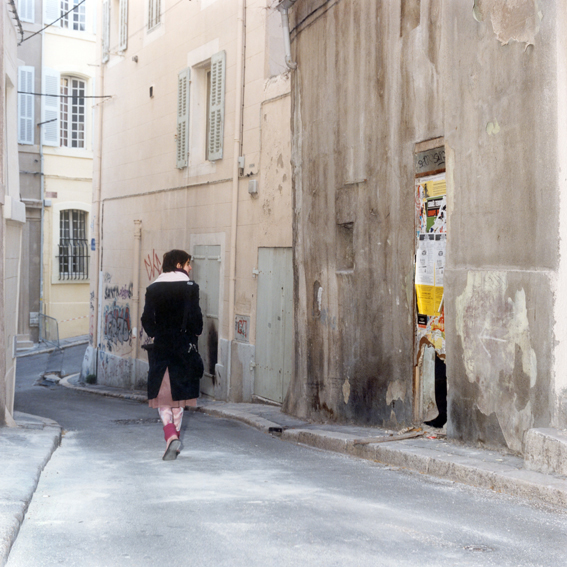 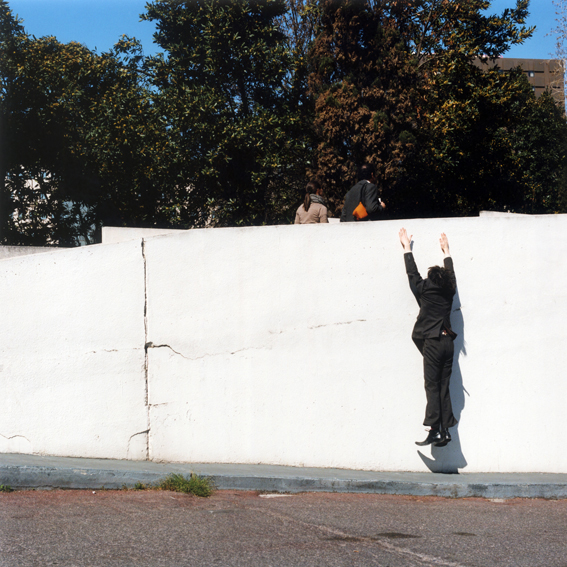 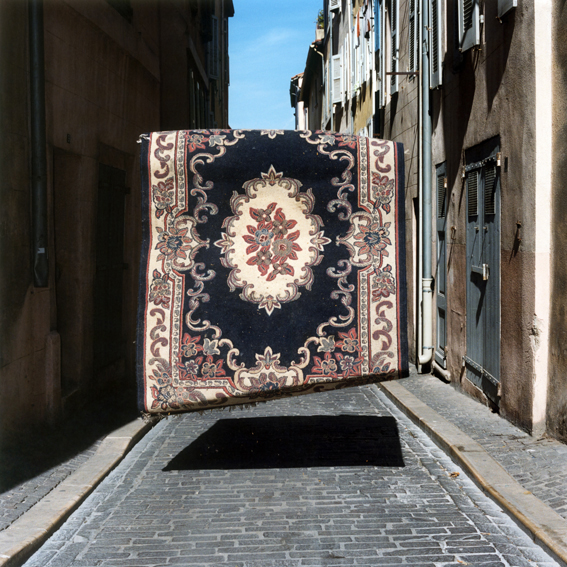 The Escapades of the Higher Man

Tom Pope’s photographs are absurd. Pope combines photography and performance as a tool to explore existential truths. His earlier images include a jumping fool, who leaps, springs and bounds. Pope does not jump for joy but for art. This is a restless body that tries to break free from the gravitational orbits of social convention and rages against the confines of g = 9.81 m/s2 = 32.2 ft/s2. Gravity is oppressive, density is dull and weight is an art issue.

In the book Six Memos For The Next Millennium, Italo Calvino, the author, discusses the value of Lightness; it has agility and luminousness, whereas weight is ‘stasis, inertia and opacity; it is a Medusa stare, a world turning into stone, a slow petrification’. Pope strives for levitation, these current images however show an unsteady modern day Perseus, the wings on the heels of this artists size 10 shoes are somewhat shaky and ill-balanced.

Escapades of a Higher Man is a new body of images and is derived from Nietzsche’s idea of ‘Gods successor’ as being the higher man, an un-conformist, who lives by a new set of social values and interactions. This lifestyle has potential to veer between brilliance and madness, which makes it a wonderful creative space for art to occupy. The photographs document these hypothesis and were taken in the summer of 2009 when Pope attended a photography residency at the Atelier de Visu, Marseilles, France. By all accounts a boot camp for photographers, an intense relentless experience of art conception, production and critique. This environment was a catalyst that enabled Pope’s artwork to reach a further level of maturity.

Influential on Pope’s performance activities has been the Yves Klein’s photograph Leap into the Void (1960) where a suited man is pictured diving horizontally from a rooftop onto a French street. The falling man has arisen, his spirit now channeled into a young dark suited Englishman in the everyday settings of Marseilles. The suit becomes an outward sign of conformity, but it is worn by the artist as a means of social camouflage.

The relationship between Tom Pope and Marseilles has been intense and playful. Under the glaring Mediterranean light, social norms of behavior in public places have been disturbed through performative and exhibitionist interactions. To document these activities, Pope uses a hand held electronic device to release the shutter and flash, the resulting images have the spontaneity and vitality of snapshots. This approach has produced two remarkable signature images. Water is thrown as a bizarre baptism from a metal bucket high into the air in an alleyway. The dynamic line of water is frozen in mid air by flash photography. The image recalls another image of liquid frozen by flash photography, Harold Edgerton’s Milk Drop Coronet (1957). In another remarkable image, Pope the trickster, finally with the assistance of a magic carpet floats free from the oppression of gravity and disappears.

‘…and this is why people OD on pills and jump from the Golden Gate Bridge, anything to feel weightless again’ 2

1 – Italo Calvino, Six Memos for the Next Millennium Vintage International, 1985