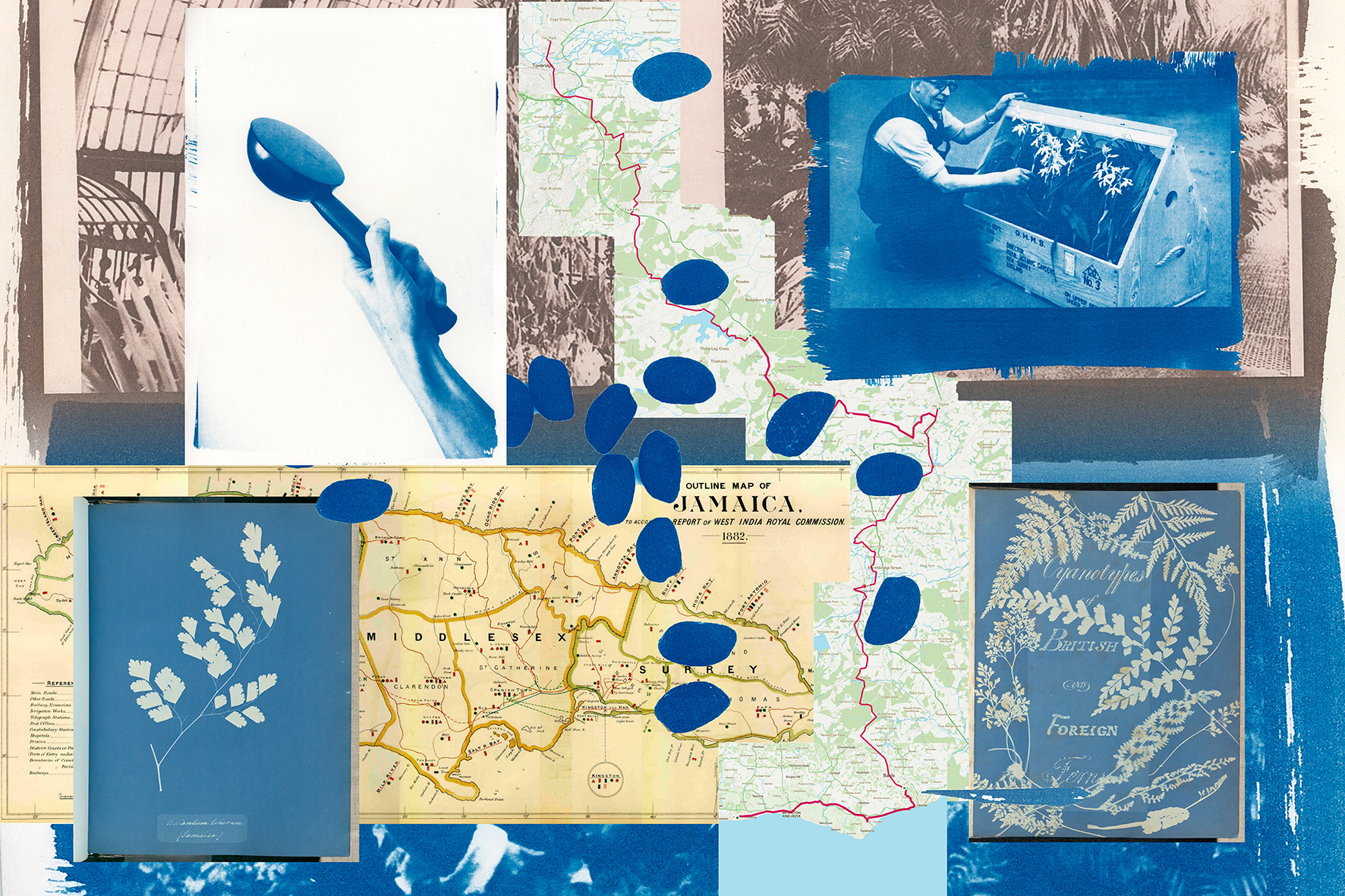 Almost Nothing But Blue Ground

Almost Nothing But Blue Ground is a collaboration between Matthew Benington and Tom Pope that takes the format of a research-led project focusing on Anna Atkins and Anne Dixon’s collaborative photographic book Cyanotypes of British and Foreign Ferns, 1853.

The project started out intending to celebrate the work of Atkins, she was the first person to publish a book of photographs, Cyanotypes of British Algae 1843. The research would inform a weeklong walk from the house where Atkins lived in Tonbridge to Hastings. Over the course of the walk, we would make a series of cyanotype photographs with the resulting works and research being presented as a performative lecture and exhibition.

Over the course of our research, we discovered that Atkins and Dixon’s book Cyanotypes of British and Foreign Ferns contains many ferns from Jamacia, this led to the discovery that Atkins husband and father-in-law both owned at least 8 plantations in Jamaica. Our findings show Atkins, both directly and indirectly, benefited from the slave trade and colonial project. The discovery has led the project to focus on areas of, decolonising the garden, the Victorian fern craze, land ownership, capitalism, the use of boundaries, the colonial project, in particular, its links with botany, planation’s, plundering of foreign lands and plant hunters.

This discovery informed the project and pivoted the main focus points leading to a different route walked. On August 21st, 2021 we undertook a weeklong walk starting at the house where Atkins lived (paid for by colonial project money), then walking to the house where Sir John Herschel (inventor of the cyanotype process) lived and then onto Ferring where Anne Dixon lived. The work we produced on the walk will now highlight the new research discoveries we made, including Atkins links with the colonial project while still acknowledging the achievement of Atkins being the first person to publish a book of photographs. On the walk, we dragged a trolley that carried our photographic equipment and acted as a darkroom on wheels, it also acted as a table where we could eat and socialise with people we met along the way and discuss the impetus of the project. The results of the walk and research will be compiled to form a performative lecture and exhibition (coming 2022). This will allow us to present the creative outcomes from the project and contextualise it within the research element of the project.